Meet the Ghost of the Mountains 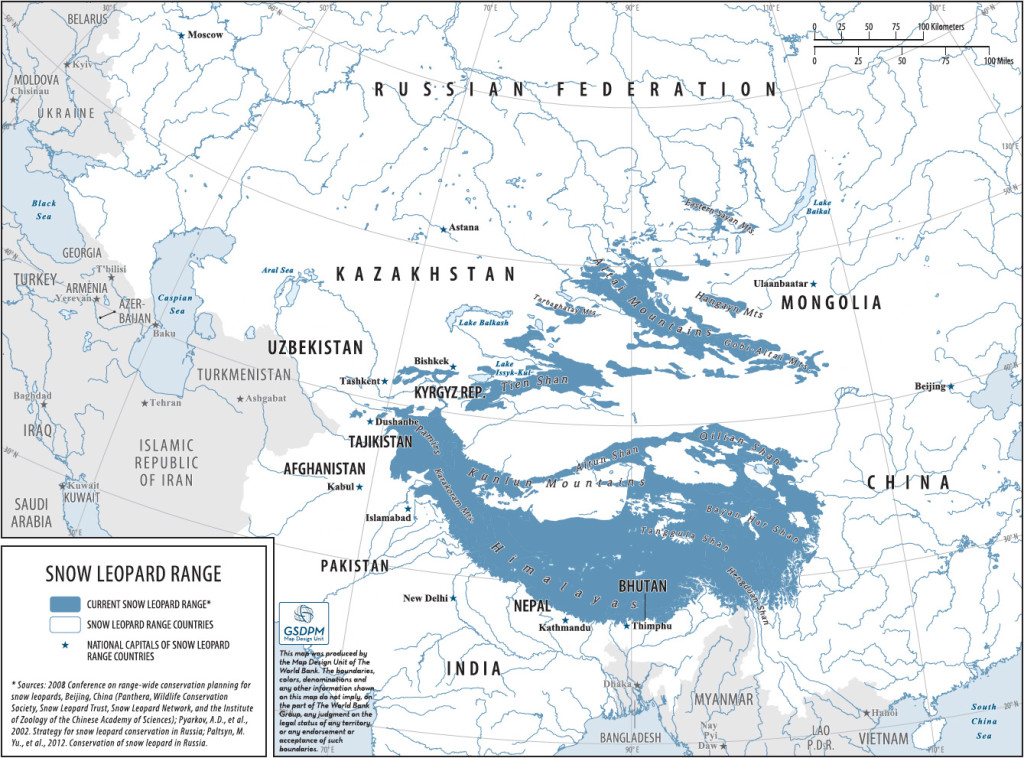 Its geographic range, 60 percent of which is in China, runs from the Hindu Kush in eastern Afghanistan and the Syr Darya through the mountains of Pamir, Tian Shan, Karakorum, Kashmir, Kunlun, and the Himalaya to southern Siberia, where the range covers the Russian Altai, Sayan, Tannu-Ola mountains and the mountains to the west of Lake Baikal.

It is found in the Mongolian and Gobi Altai and the Khangai Mountains. In Tibet it is found up to the Altyn-Tagh in the north. This beautiful and charismatic great cat is largely solitary and lives at low to very low densities in mountainous rangelands at elevations from 540 to more than 5,000 meters above sea level.

The snow leopard is listed as globally Vulnerable on the IUCN Red List and the species is listed (as Uncia uncia) on Appendix I of CITES (Convention on International Trade in Endangered Species of Fauna and Flora), which prohibits international trade in the animal and its parts and products except under exceptional, non-commercial circumstances. All snow leopard range countries except Tajikistan are parties to CITES but the process for Tajikistan to join is underway.

The Convention on Migratory Species deems the snow leopard a “concerted action species,” thus obliging the six range countries (India, Mongolia, Pakistan, Russian Federation, Tajikistan, and Uzbekistan) party to this convention to conserve and restore its habitat. The snow leopard is also protected by national laws in all of the 12 countries in which it is found.

Some national estimates are very outdated and up-to-date estimates of area of occupancy and population size are urgently needed.

Snow leopards are high-altitude rock specialists, although in Russia they can live at elevation 540-800 m above sea level. They have been recorded in high rocky areas, alpine meadows, alpine steppe shrub, and high altitude forests. They generally live above the tree line at elevations of 2,700-5,000 m. During winter, the snow leopard may descend to lower elevations, but in summer moves back up mountains to the steepest and most remote terrain. In Tibet and Mongolia, they may occupy relatively flat or rolling terrain when there is sufficient cover. There is no single optimal habitat and conditions vary across the range. Habitat use varies with such factors as ease of movement, prey availability, and the presence of predators, competitors, and people. They reportedly prefer broken rocky terrain and irregularly sloping areas, while unfavored habitats include major valleys, forested areas, areas of intense human use, and extensive open areas. These habitats may, however, provide vital regions for connectivity of the species’ range.

In Nepal, snow leopard home ranges overlapped in commonly used “core areas” that intersected with the most favorable local topography, habitat, and prey. These core areas are marked significantly more frequently than non-core sites. Female snow leopards raise their young in areas where critical prey resources are concentrated and easiest to obtain. Because breeding females must satisfy their elevated energy requirement (100% increase in biomass intake over non-breeding requirements) with minimal time away from their young, they are restricted to optimal habitat.

Dispersal is thought to occur at 18-22 months and sibling groups may remain together briefly after independence. Snow leopards generally avoid crossing open terrain, but dispersing cats have been known to traverse 20-65 km of open steppe and desert to reach isolated massifs. There are records of snow leopards 150-200 km from their normal haunts. Ameliorating anthropogenic barriers to dispersal, such as highways and railroads, extensive mining areas, and militarized border areas, are essential for successful snow leopard dispersal.

Snow leopards are opportunistic predators, but their distribution coincides closely with the distribution of their principal prey, ibex and blue sheep (bharal). They can kill prey up to three times their own weight, so in their range only adult camels, kiang, and wild yak are excluded as prey. Scientists have found an unusual amount of twigs and vegetation in their scats for reasons unknown.
Foraging: Terrestrial, most active at dawn and dusk. They find prey by following animal trails made by livestock and wild ungulates and other natural relief features. They use a solitary stalking and ambush hunting style, using ledges, cliffs, and broken terrain to approach and launch an attack. Adults do not hunt cooperatively but food is shared between females and cubs.

Solitary except for females with young, mating pairs, and a dispersing litter that may roam together temporarily. Breeding male home ranges overlap breeding female home ranges. Snow leopards have a well-defined birth peak in May, although births occur from February to September, which means that they also have a well-defined mating period between January and mid-March, a period of intensified social marking and vocalizations. Most felid females live alone in separate or partially overlapping home ranges; a single male can monopolize breeding with several females by defending a large territory that overlaps several female home ranges. But when snow leopard females come into estrus at about the same time, it is unlikely that any one male can monopolize mating, resulting in considerable home range overlap among males.

In the absence of poaching, prey density and distribution explain snow leopard densities. Radio telemetry studies have measured home range sizes of 12-39 km2 in Nepal to 500 km2 in Mongolia. Densities range from <0.1 to 10 or more individuals per 100 km2. The quality of the habitat is determined by available prey, which, therefore, determines how many reproducing female snow leopards can be accommodated within an area.

Snow leopards kill a large ungulate every 10-15 days and, if not disturbed, stay with a kill for a week. An adult needs 20-30 blue sheep equivalents a year. As a result, a single snow leopard requires a minimum population of 100-150 hooved animals of various species living in its home range.

Mortality rates of snow leopard females vs. population sizes have not yet been established, but we can estimate that they will be similar to those of tigers. As an indication, tigers require large populations to persist and are susceptible to modest increases in mortality. Although high prey numbers are essential to sustain tiger populations, prey recovery efforts will not be sufficient if tiger mortality rates reach or exceed 15%. A population with 15% mortality among the breeding females requires >80 breeding females to remain viable. If survivorship of the breeding females nears 100%, tiger populations can grow at an annual rate of about 20%. Like tigers, snow leopards are also vulnerable to poaching of their prey.

Some national estimates are very outdated and up-to-date estimates of area of occupancy and population size are urgently needed.

Estimated area inhabited and population size of snow leopards in the 12 range countries. 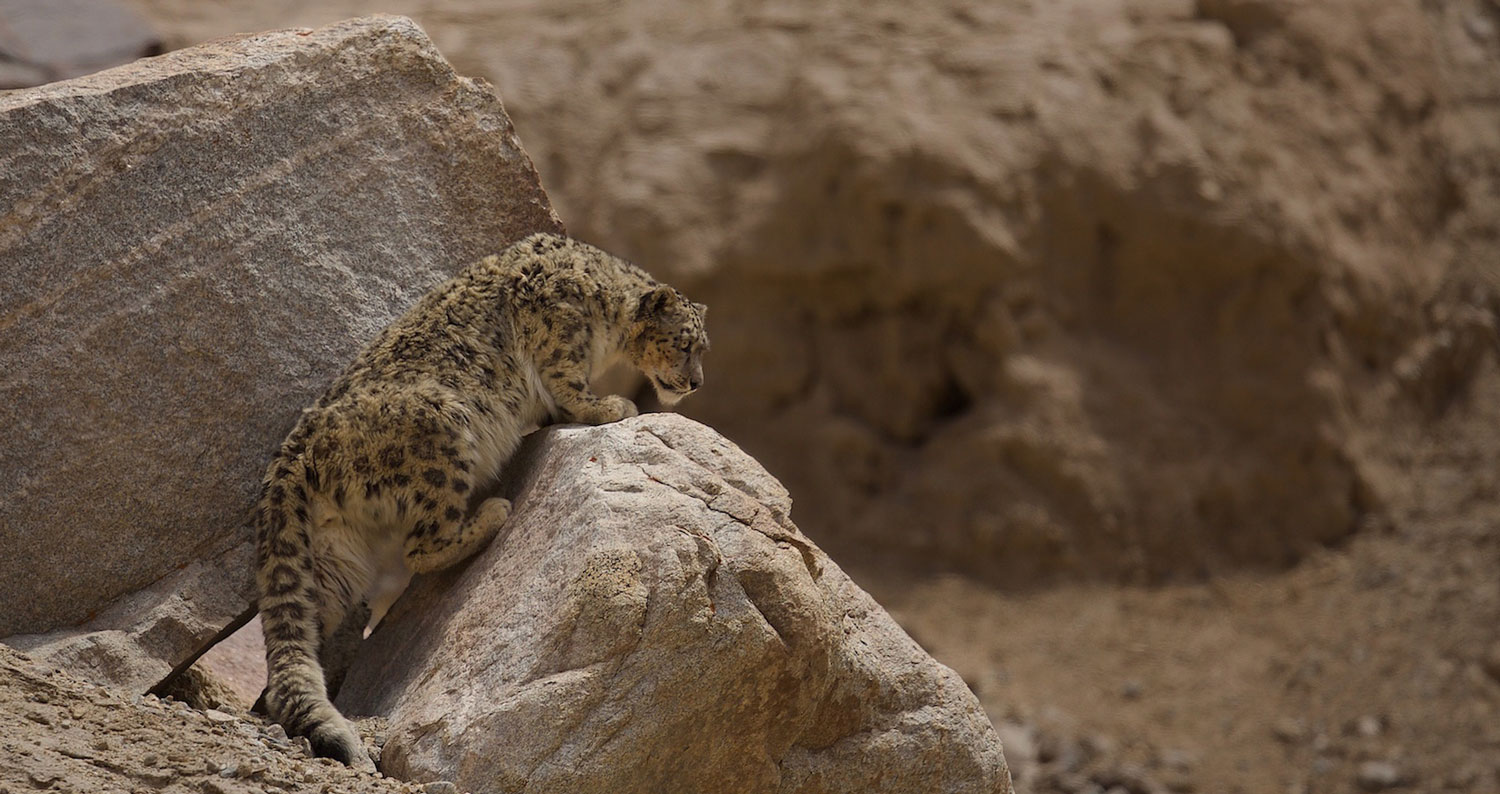