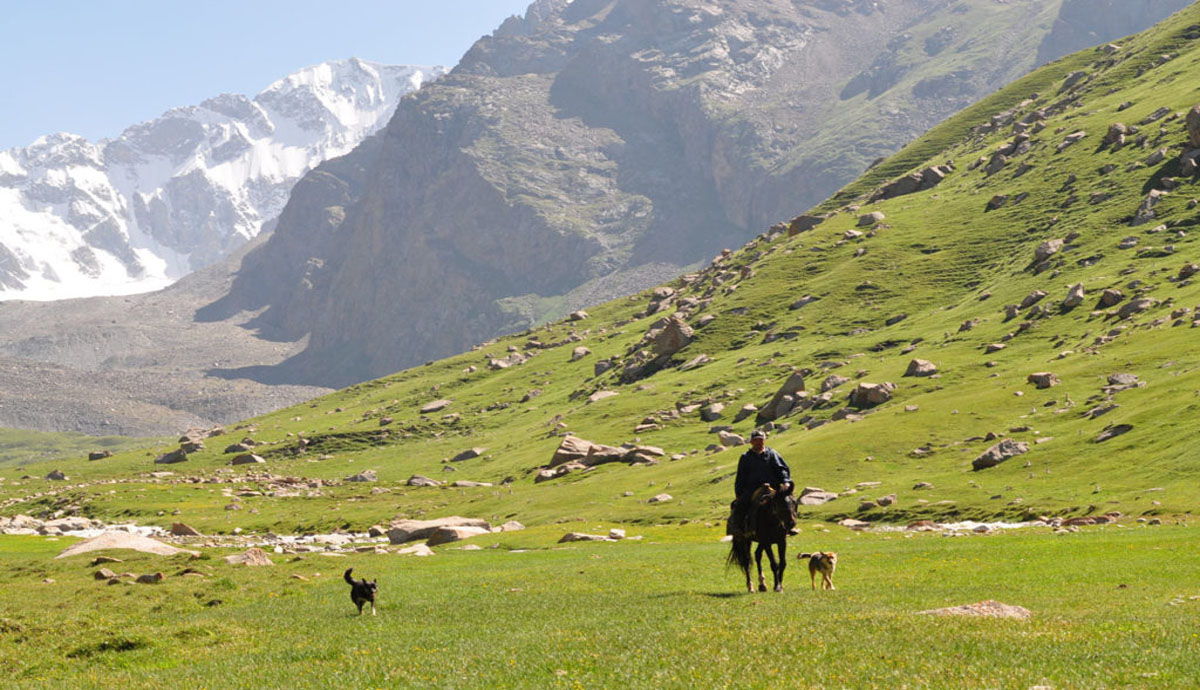 Though the slopes of the Chatkal, Pskem and Ugam Ranges in the Western Tien Shan and the Gissar ridge in the Pamir Alai mountains are home to both humans and wildlife, co-existence is not always easy. Increasingly, snow leopards and people are coming into direct conflict as this endangered cat kills domestic livestock in rural household (dekhan) farms.

One of the key issues fueling human-snow leopard conflict is the decline of the snow leopard’s wild prey, such as blue sheep, Asiatic ibex, and argali. The numbers of these prey species have significantly declined due to habitat degradation and competition for forage with increasingly large domestic livestock herds that graze in Uzbekistan’s montane forests, steppes and sub-alpine meadows. Livestock grazing is intense and unsustainably managed, resulting in severe land degradation, including reduced productivity, soil erosion and desertification.

With their key food source declining, snow leopards are increasingly turning to another food source—domestic livestock, the loss of which brings significant economic hardship to the local herders. As a result, herders resort to retaliatory killing of snow leopards, both directly and opportunistically, as snow leopards unwittingly get caught in traps or ingest poison set out for other predators, such as wolves.

The government and partners are determined to address, among other issues, the human-snow leopard conflict in Uzbekistan through a multifaceted approach in two landscapes: Ugam-Chatkal National Park and Gissar Special Nature Reserve (also an identified GSLEP landscape) and their buffer zones.

The project will work closely with local communities to prevent conflict by renewing the snow leopards’ primary food base—wild ungulate populations—though restoration of the degraded high-altitude pastures and forests in the snow leopard range. It will encourage a more collaborative approach to sustainable pasture and forest management practices as well as provide incentives to pastoralists to shift to alternative income-generating enterprises, including opportunities for women. Additionally, the project  will encourage the adoption of more efficient energy technologies to reduce the extent of tree clearing in alpine forest habitat for household heating and cooking needs.

Keeping snow leopards physically separated from the livestock is another conflict prevention strategy that the project will deploy. Most dekhan farmers typically send their herds to graze in the open, unsupervised or guarded by children. Even when they exist, many of the corrals for livestock are poorly constructed and easy for predators to penetrate. The project will support pastoralists to construct predator-proof enclosures and procure technologies such as electric fencing, predator-proof collars and livestock guard dogs.

Another important component of the project is to adequately address the damage incurred when prevention measures fail. Reducing preventable livestock mortality through improved access to veterinary services and vaccinations is one project strategy to help families better withstand the financial shock of losing an animal to a predator. The project will also establish local insurance schemes to provide compensation for depredation events by native wildlife. Community liaison officers and an independent wildlife specialist will process and evaluate these claims.

Given the impact that livestock depredation has on local communities, it is understandable that snow leopards are commonly viewed as a threat. To foster tolerance towards snow leopards, the project will conduct education and outreach programmes to improve awareness about the value and importance of conserving snow leopards, their prey and their habitats.