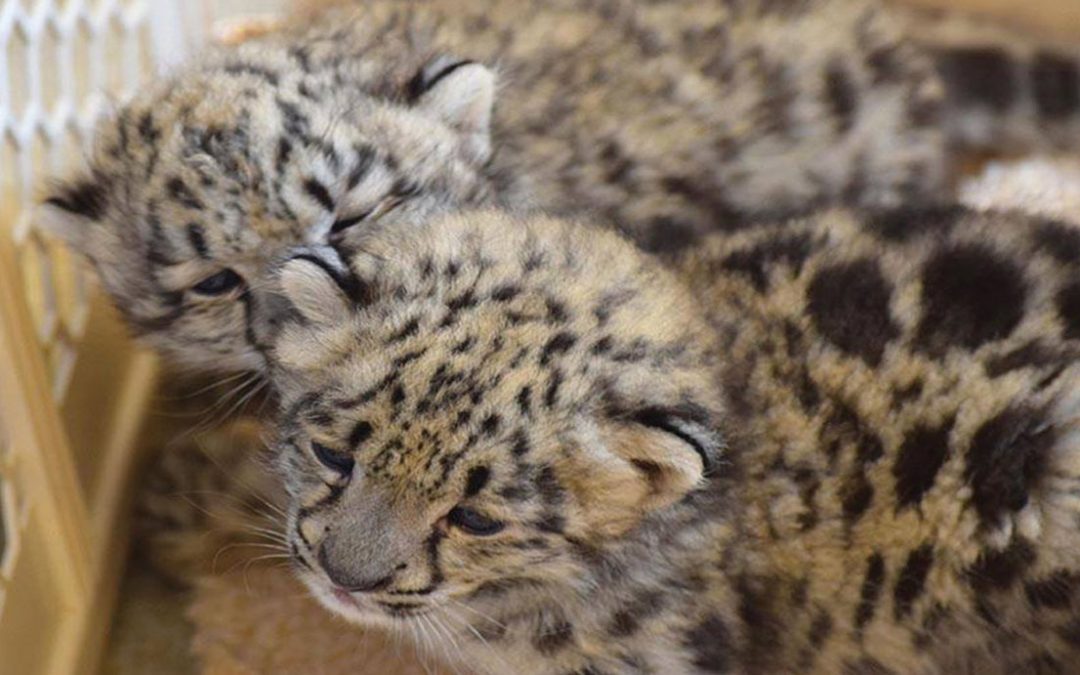 Love has found a way to prevail at Miller Park Zoo in Bloomington with the recent birth of two female snow leopard cubs from cats Rilu and Hima, who were first introduced back in 2012. “I have worked with many carnivore pairs,” Zoo Curator Jonathan Reding said. “From day one the introduction of the pair was close, and they shared a special, close bond with each other.” The species has an average of ten litters per year in the U.S., so the birth of two snow leopards is a happy occurrence. The snow leopard is an endangered animal. The species is difficult for scientists to study because the leopards reside in an isolated habitat in the mountainous regions of Central and South Asia “They are found in very high elevations of rocky cliffs of mountains. They are a very agile animal with a long tail that acts like a rudder when jumping down the rocks that helps their balance,” Reding said. “Not a lot is truly known about them in their wild habitat because of the location; it’s hard to get up there and study them.” Difficulties like these make the captive population important to observe and study given how little is known about the animals. According to National Geographic, snow leopards are threatened due to poaching and death from herders because they are known to occasionally eat domestic animals. Because the population is in such dire shape, a number of government and conservation groups have created survival strategies. Additionally, there are special days during the calendar year to celebrate awareness for the endangered feline. Jay Tetzloff, superintendent of the Miller Park Zoo, also serves as a snow leopard coordinator for the Species Survival Plan. He works to help the cat’s population survive and diversify. Tetzloff was away on vacation and unable to be reached for comment. According to the Global Snow Leopard & Ecosystem Protection Program, which monitors snow leopard populations, only 3,000-6,000 snow leopards exist in the wild. But there is still hope for the population in captivity. Miller Park Zoo’s cubs are now 7 weeks old and still in the zoo’s hospital, being hand-raised by zoo staff. “This is not something that is not unheard of and we are providing the environment as best we can for these wild animals by doing things like holding them like the mother would,” Reding said. The cubs are fed at noon and 4 p.m. Visitors can view them through a hospital window. “It’s very exciting because this is the first big cat I’ve worked with and this is such an endangered species it is incredible to work so closely with them,” Ben Olson, a zookeeper at Miller Park, said. “It would’ve been better for the mother to take care of them, but we’re doing the best we can and they’re growing and doing really well.” The cubs will remain unnamed until Sept. 12 when the zoo hosts ZooDo, a fundraiser where naming rights will be auctioned off to the largest charity donor. Original news: http://www.videtteonline.com/index.php/2015/06/23/miller-park-zoo-houses-two-snow-leopard-cubs/