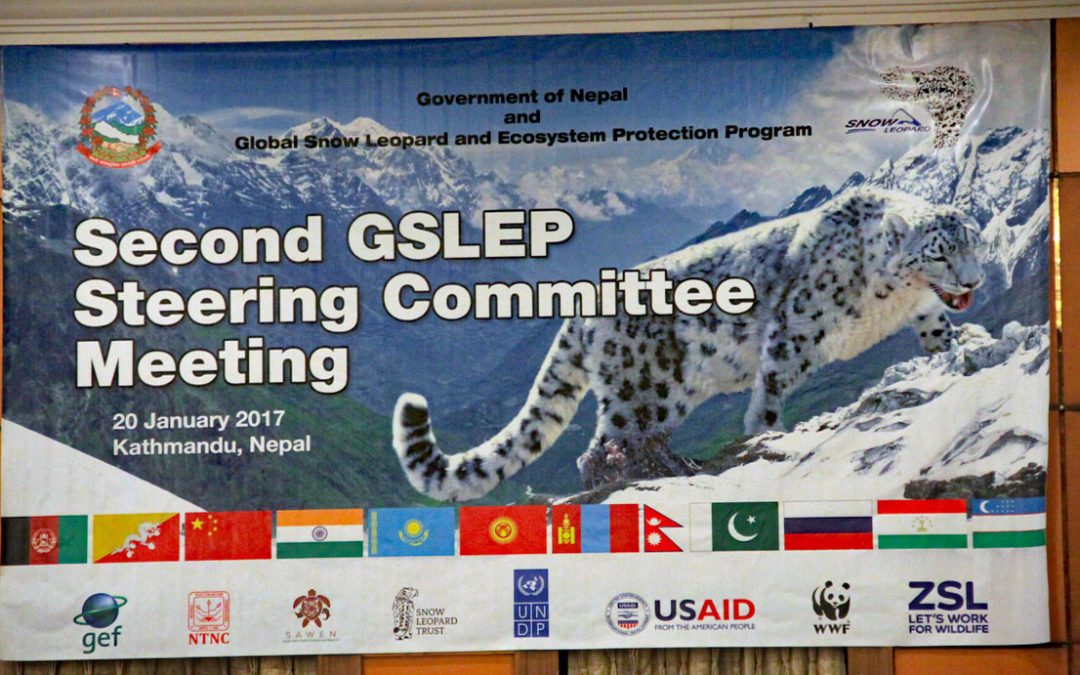 All twelve snow leopard range countries attend high-level meeting in Nepal, reiterate their commitment to the objective of securing 20 snow leopard landscapes across the cat’s range by 2020.

Download press release as PDF Download Kathmandu Resolution as PDF Founded on the principle that to conserve our natural ecosystems and species, we must gain the support of local people, the Global Snow Leopard and Ecosystem Protection Program (GSLEP) was initiated in the year 2013, is championed by the governments of 12 snow leopard range countries*, and supported by national and international organizations from across the world. The Steering Committee of the GSLEP Program, comprising of Forest and Environment Ministers (or their designates) of the 12 snow leopard range countries, met on the 20th of January 2017 in Kathmandu Nepal. A two-day long stocktaking workshop on the status of management plans of the GSLEP landscapes, and overall progress of national snow leopard and ecosystem priorities preceded the meeting. These management plans are expected to be the blueprints of the ambitious goal of the program, secure 20 snow leopard landscapes with viable snow leopard populations by 2020. These landscapes cumulatively cover 500,000 sq km of the snow leopard habitat, and securing these will ensure protection to nearly 25% of the entire snow leopard distribution range. All 12 snow leopard range countries were represented in the meeting, attended by respective ministers or their designates, that highlighted substantial progress in management planning of the GSLEP landscapes. Countries that have made particularly rapid progress towards achieving the GSLEP goals pointed out partnerships and decentralization of implementation mechanisms as the main drivers for success.

All twelve range countries were represented in Kathmandu. Photo by WWF

From the countries’ reports, four issues have emerged that need immediate attention: resource mobilization, capacity building, illegal wildlife trade, and climate change adaptation. The workshop facilitated discussions among participating countries and partner organizations on various mechanisms for the implementation of management plans. Innovative models of co-management of large landscapes from Nepal and other parts of the world were discussed. Several innovative models of resource mobilization for the implementation of national snow leopard and ecosystem priorities and global support components of the GSLEP program emerged that are either being implemented already, or can be implemented through concerted efforts. For instance, the Global Environment Facility (GEF) is supporting implementation of the GSLEP program in many countries as well as regionally with projects worth more than $40 million already approved or in the pipeline. Discussions focused on existing and potential support from country governments, international financial institutions, and also business and industry. A plan to explore further funding using Green Climate Fund, bilateral treaties and greater engagement with business and industries was discussed.

Mr. Shankar Bhandari, the Minister of Forest and Soil Conservation of Government of Nepal, announced a plan to establish a Himalayan Research Centre in the country to encourage youth in snow leopard research and conservation. Nepal’s Prime Minister, Mr. Pushpa Kamal Dahal, pledged a contribution of US$500,000 from his government for snow leopard conservation. The Prime Minister also hailed the Kyrgyz President’s proposal of hosting the Summit in Bishkek in September 2017 and offered his full support to the endeavour. The President of the Kyrgyz Republic, Mr. Almazbek Atambayev has proposed to host a Global Snow Leopard Summit in Bishkek on 7 and 8 September 2017. The purpose of the Summit is to energize the progress of the GSLEP Program at its mid-point (2013 – 2020), tackle the growing threats to snow leopards and their habitats, and raise financial resources for GSLEP implementation. The event is expected to help raise resources to not only support implementation of national and global priorities identified by the program, but also to foster integrated development of local economies and conservation of wildlife in Asia’s mountain areas.

Abdylkalyk Rustamov invited delegates to Bishkek for the Snow Leopard Summit in September. Photo by WWF

Mr. Zahid Hamid, Minister of Climate Change from Pakistan and Chair of the GSLEP Steering Committee, invited his counterparts to a ministerial pre-summit meeting in Islamabad to prepare the final Summit agenda and documentation in June or July 2017. The Steering Committee acknowledged the leadership of the incumbent Chair, Minister of Climate Change from Pakistan, and co-Chair, Director of State Agency of Environment Protection and Forestry under the Government of the Kyrgyz Republic, and decided to extend their terms until the Snow Leopard Summit. There was also consensus on electing Nepal as the next Chair of the GSLEP Steering Committee, to take over the chairmanship after the Summit in September.

To mark the end of the meeting, 12 school students, all members of Friends of Zoos, whose snow leopard paintings had been chosen by a jury organized by NTNC-Nepal, presented their paintings to the heads of delegations from each of the 12 snow leopard range countries. The winning students received cash prizes in addition to getting a certificate of appreciation by Mr. Shankar Bhandari. In his role as Steering Committee Chair, Mr. Hamid closed the meeting after acknowledging the role of the Government, the Prime Minister and the people of Nepal for hosting the Steering Committee Meeting on behalf of the snow leopard range countries.

Mr. Zahid Hamid, Minister for Climate Change, Pakistan / Chair of the Steering Committee: “We thank the esteemed members of the Steering Committee for their confidence. To keep the momentum moving, we propose to get together in Pakistan this summer and finalize the agenda for the Bishkek Summit.” Mr. Abdykalyk Rustamov, Director of the State Agency of Environment Protection and Forestry under the Government of the Kyrgyz Republic / co-Chair of the Steering Committee: “It is an honor and a pleasure for Kyrgyzstan to once again invite our friends and colleagues from across the snow leopard range to Bishkek, where this inspiring process began.” Mr. Deepak Bohara, Minister for Supplies, Nepal and member of GTI Council: “With climate change increasingly impacting humans as well as wildlife, conflicts are bound to increase unless we address the issues now, and prepare towards appropriate mitigation measures.” Mr. Shankar Bhandari, Minister for Forests and Soil Conservation, Nepal: “Economic development is a necessity, but it cannot come at the cost of our environment. Millions of people depend on the health of our ecosystems, so conservation is not a luxury. We need green investment that can foster sustainable growth.” Mr Keshav Varma, Director of the GTI Council: “Only a political alliance of national and global leaders can reinforce the conservation efforts of Snow Leopards and their fragile habitats. Kathmandu demonstrates the value of such a political coalition led by ministers from range countries and the Prime Minister of Nepal and senior members of his cabinet. This political will should translate into higher resources and coordinated action against poaching and illegal trade. We have a challenging journey ahead and the Summit at Bishkek would need hard work from all of us.” Mr. Doley Tshering, Regional Technical Adviser, UNDP: “UNDP is committed to supporting the GSLEP Program and are working closely to achieve the global and national snow leopard and ecosystem priorities. We have recently secured US$ 1 million from the Global Environment Facility (GEF) for transboundary cooperation for snow leopard and ecosystem conservation in Central Asia, and the project will be implemented by the Snow Leopard Trust.” Mr. Maheshwar Dhakal, Joint Secretary, Ministry of Forests and Soil Conservation, Nepal: “Protection of snow leopard and its habitat conservation is largely dependent on the involvement of local youth and local communities as they are the primary beneficiaries of mountain ecosystem and the environmental services produced by it.” Ms. Kate Newman, Vice President for public sector initiatives, WWF: “The progress towards achieving the GSLEP goals is encouraging. We need to implement models of green infrastructure that will help meet the development needs and aspirations of communities and nations in the high mountains of Asia without causing irreplaceable damage to their vital ecosystems.” Mr. Michael Despines, Executive Director, Snow Leopard Trust: “The snow leopard needs both grassroots conservation efforts within local communities and top-level commitments from governments and international institutions. The GSLEP process is unique because it brings both of these dimensions together.” Dr. Koustubh Sharma, International Coordinator, GSLEP Secretariat: “Such multi-stakeholder engagement for snow leopard conservation is highly encouraging. Support for snow leopard conservation has never been stronger, and it would not have been possible without the participation of all range country governments and support from partner organizations”