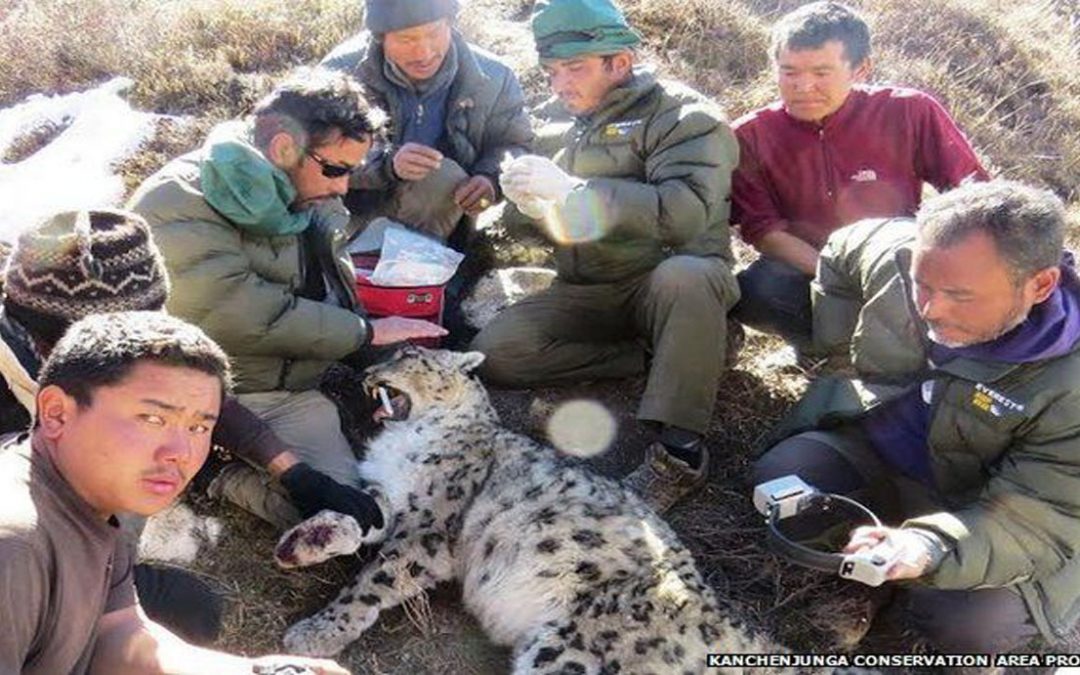 Wildlife conservation experts in Nepal say they have made a significant advance by fitting a satellite collar on a second snow leopard in the Kanchenjunga Himalayan region.

Despite many attempts, it is nearly two years since they first fitted a leopard with a tracking collar. The rare snow leopard roams the Himalayan and other highland regions. The population in Nepal has been estimated at between 350 to 590, according to a 2009 study. Hemraj Acharya, an official of Kanchenjunga conservation area project (KCAP) in Taplejung in eastern Nepal, told the BBC that the male snow leopard was captured after intensive efforts. There are fewer than 600 snow leopards in Nepal Known as Omi-Khangri, the 41kg cat is named after the 4,800m (15,700 ft) mountain area it was found in. Conservationist officials spent weeks searching and laying traps, before the animal, thought to be four or five years old, was finally captured on 21 May, Mr Acharya said. “It was a quite difficult task: after laying the trap on 1 May, we had to wait for more than 20 days and also change our trapping methods,” Mr Acharya told the BBC. “We failed to trap one many times in recent months, after trapping the first one. But this time, we succeeded.” The move will allow conservationists to use GPS satellite monitoring to track the endangered animal as it crosses national boundaries. Officials say data received from the satellite device will help officials identify the animal’s habitat areas and devise conservation strategies accordingly. The snow leopard is sedated before its collar is fitted Officials in Nepal first satellite-collared a snow leopard in 2013; a male of around five years of age, in Kanchenjunga conservation area. The area, named for the world’s third highest mountain, is home to around 25 snow leopards, according to officials. After that initial success, officials attempted to expand the programme, receiving government permission to collar four more leopards. Omi-Khangri is one of around 25 snow leopards in the conservation area Local conservation officials said the new collar was functioning well and they had started receiving data from it. “Satellite data currently being received from Omi-Khangri suggests it is moving around in the same area,” said conservationist Lochan Limbu. Data received last year from the first leopard’s satellite collar suggested it travelled as far as Sikkim in neighbouring India – indicating that the wildlife’s natural habitat transcends political boundaries.By Surendra PhuyalBBC News, KathmanduOriginal news: http://www.bbc.com/news/world-asia-33044899