Mongolia releases the preliminary results of its first nation-wide snow leopard population assessment, estimating that there could be 953 (806 – 1127) adult snow leopards in the country.

The Bishkek Declaration 2017, endorsed by the governments of all snow leopard range countries urged the scientific community to develop and implement a replicable and reliable protocol to estimate snow leopard abundance within landscapes, countries, regions and the species’ entire distribution range. An ambitious initiative, called PAWS (Population Assessment of the World’s Snow Leopards) was launched by the Global Snow Leopard Environmental Protection (GSLEP) program, aimed to produce a scientifically robust global population estimate of snow leopards. The initiative is guided by a 11 member scientific advisory panel that includes some of the world’s recognized population ecologists and snow leopard ecologists. The advisory panel came up with generalized guidelines and procedural details to achieve this herculean task.

It is heartening to witness the leadership shown by Mongolia, home to the second largest population of snow leopards in the world, in becoming one of the first few countries to have initiated the implementation of a country- wide snow leopard distribution and population assessment using methods compliant to the PAWS guidelines. This is a remarkable collaborative effort between WWF-Mongolia, the Snow Leopard Conservation Foundation, Ministry of Environment and Tourism of Mongolia and partners (listed below). In an unprecedented effort, nearly half a million square kilometres were surveyed to develop a sophisticated distribution map of snow leopards across the species’ potential range. These surveys were conducted in such a way that they addressed the possibility that snow leopards can at times be present in an area but still remain undetected.

In the second phase, more than two dozen sites were sampled with nearly 1,500 camera traps that generated more than 1,300 encounters of wild snow leopards. As any statistician can confirm, using an adequate sampling design is essential in order to obtain reliable estimates, no matter what the sampling effort. These sites were sampled using the state-of-the-art sampling guidance developed by the PAWS team to ensure adequate representation of the entire country’s snow leopard distribution.

While the results presented here show promise, we would also like to clarify that these are only preliminary estimates and one must wait for the final 2017-2020 estimates, to be calculated after the national team has obtained data from the remaining five trapping sessions, explored spatial heterogeneity in snow leopard density, and addressed the issue of possible misidentification of certain individuals that may lead to overestimation. Note also that without a design or model designed specifically to obtain estimates at fine spatial scales, estimates from larger-scale surveys will in general give biased estimates for smaller “pockets” within the surveyed region. We hope that this report helps illustrate the PAWS guidelines in practice and helps other range country teams and PAWS effort in the near future. 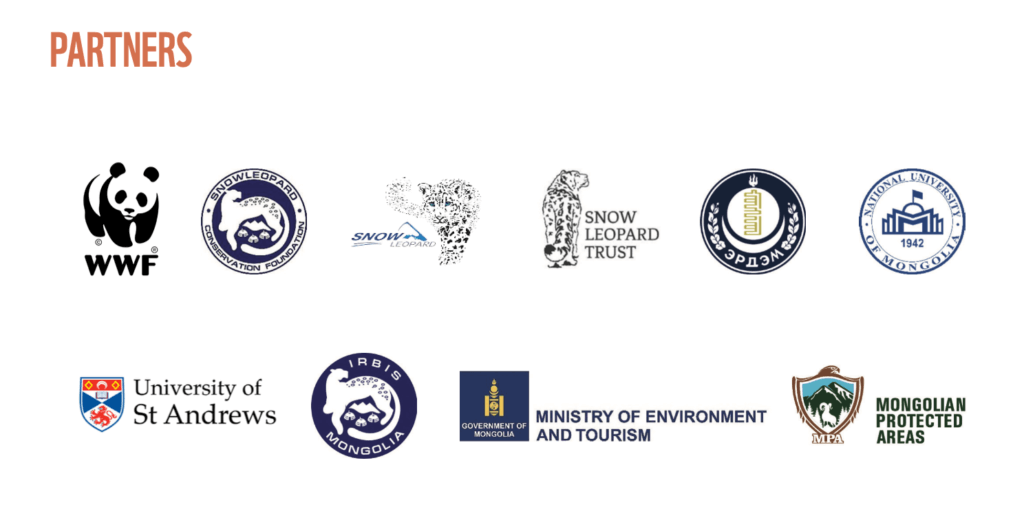