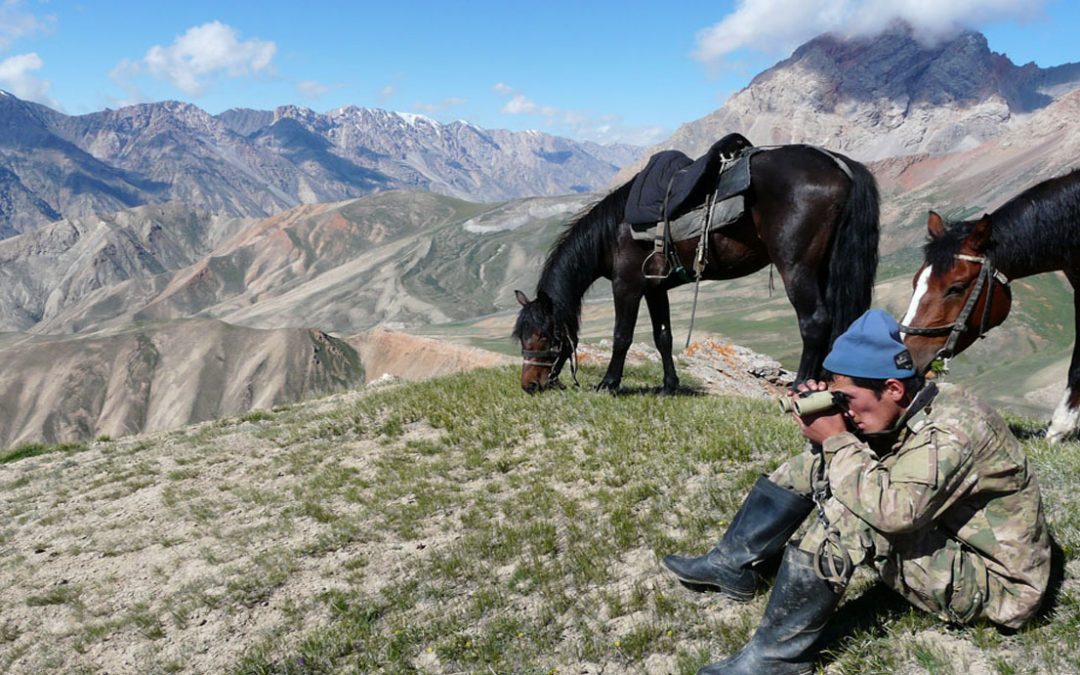 Seven wildlife crime law enforcement officials in Kyrgyzstan have received a Citizen Ranger Wildlife Award for their courage in the fight against illegal hunting in the country’s snow leopard habitat in 2016. They were publicly honored in a ceremony in Bishkek today, on World Wildlife Day.

Among the honorees was a park ranger from Kan-Achuu Nature Park. He and his colleagues had spotted a group of poachers while patrolling the protected area. After following the seven poachers all night, the rangers caught them the next morning with a killed ibex. The poachers tried to hide the evidence, but the rangers were able to secure it and prove the case. The culprits have been sentenced to a fine of 110,000 Kyrgyz Som (US$ 1,500). In another case, a local man was caught by police with a dead snow leopard’s skin and skull. He claimed that he had accidentally shot the cat during a nighttime wolf hunt. However, officials from the Department of Rational Use of Natural Resources interpreted the fact that he had skinned to dead animal and brought the skin and skull into town as an attempt to sell the remains. The apprehended man has paid a fine of 500, 000 Kyrgyz Som (US$ 7,200).

Abdyshev Kanat apprehended an armed poacher when patrolling in the Issyk-kul Reserve, Kyrgyzstan. For his efforts he received an award from Minister Rustamov. Photo: SLF

The award ceremony was attended by Mr. Abdykalik Rustamov, the Director of the State Agency of Environment Protection and Forestry of the Kyrgyz Republic, who presented the awards, as well as by the local state bank RSK, and around 40 representatives of various local and international . The Citizen Ranger Wildlife Award is the result of innovative program designed to empower those on the front lines of the fight against poaching and illegal hunting.

The First Line of Defense

“Rangers and local communities in protected areas are the first and best line of defense for wildlife”, says Charu Mishra, Science & Conservation Director of the Snow Leopard Trust, a partner on the rewards program “They work under difficult circumstances to protect the natural heritage of their country, and we’re committed to helping them do that as well as possible.” The Citizen Ranger Wildlife Rewards program was piloted in 2014 in partnership between the State Agency of Environment Protection and Forestry of the Kyrgyz Republic, Snow Leopard Foundation Kyrgyzstan, and Snow Leopard Trust, with WFN Partnership Funding by Fondation Segré (managed by the Whitley Fund for Nature), and Woodland Park Zoo. The program provides public recognition and financial award for those rangers and private citizens who successfully apprehend poachers and help bring them to justice. It has since been expanded nationally to cover all of Kyrgyzstan’s Protected Areas, thanks to a grant from IWT Challenge Fund through the UK Government. IWT Challenge Fund is also supporting law enforcement trainings for rangers in all protected areas of Kyrgyzstan, which are being led by INTERPOL.

“It’s important to honor and recognize the outstanding work that our wildlife rangers are doing every day”, says Abdykalik Rustamov. “These are brave people who are doing a great service to our nation and the world.” “Both the trainings and the awards mean a lot to these rangers”, says Kuban Jumabai uulu, the Director of the Snow Leopard Foundation Kyrgyzstan. “They’re dedicated to protecting Kyrgyzstan’s precious wildlife, and if we can further empower them to do that, we can make a real difference in the fight against poaching!” Citizen Ranger Awards were presented by Mr. Rustamov to Abdyshev Kanat, Kalchaev Asanbek Rispaevich, Asilbekov Suimonkul Tursunbekovich, Jusupov Makkambai Sarybaevich, Shadikan uulu Kadir, Kurmankojoev Nurlan Alikadirovich, and Dokonbaev Ulan Ishembaevich.