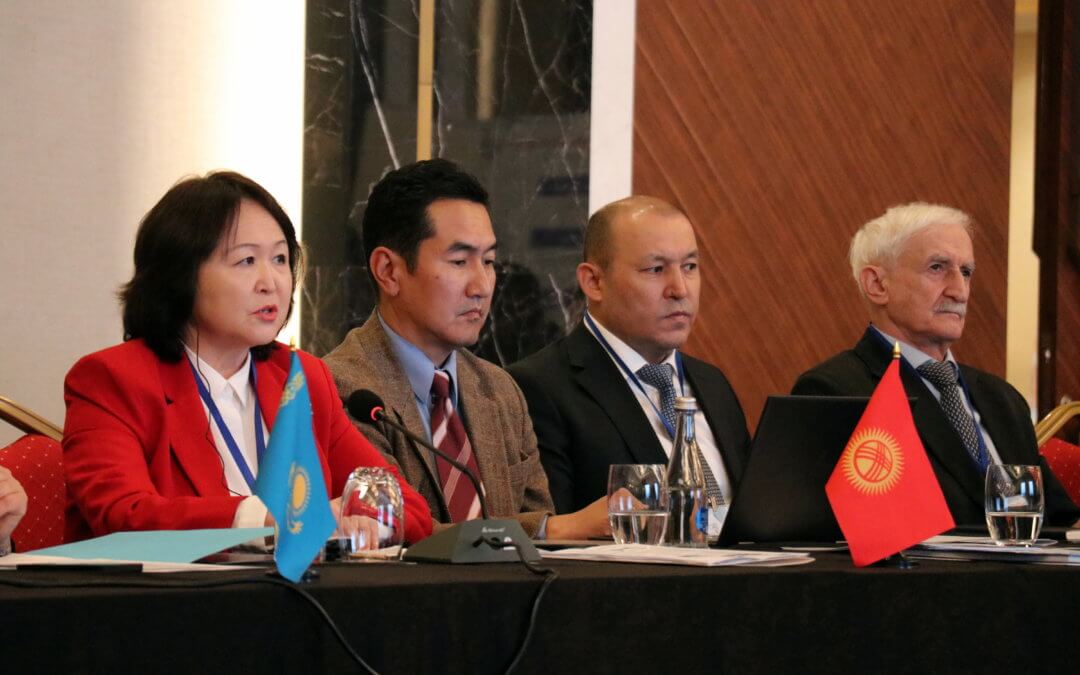 On October 20-21, 2022, delegations from 10 of the 12 snow leopard range countries came together for the seventh steering committee meeting of the Global Snow Leopard and Ecosystem Conservation Program (GSLEP), hosted by the Government of Kyrgyzstan. The snow leopard is an endangered species and an emblem of Asia’s high mountains, also called the Third Pole, that faces dire threats due to climate change, which is proceeding here at twice the average rates of warming in the Northern Hemisphere.

Ministers of Environment from seven countries addressed the meeting  The Minister of Natural Resources, Ecology and Technical Supervision of the Kyrgyz Republic Ms. Dinara Kutmanova shared her country’s commitment to conserving the snow leopard in the Kyrgyz Republic and listed steps required to intensify conservation efforts  globally. Minister Ms. Aliya Shalabekovafrom Kazakhstan inaugurated a new multi-country initiative called Equal One to support entrepreneurs from local communities living in snow leopard landscapes in setting up sustainable, inclusive, and conservation friendly business startups. Former Minister of Costa Rica and current head of the Global Environment Facility Carlos Manuel Rodrigeuz  applauded the work of the GSLEP program and thanked the snow leopard range countries for recognizing that the future of the snow leopards, high-mountain landscapes, and communities is all connected.

The more than 100 delegates present celebrated the news about the GSLEP Program being selected to receive the Worldwide Award for Biodiversity Conservation from the BBVA Foundation in Madrid, Spain on 23rd November this year. Announcing the news, Dr. Charu Mishra, Executive Director of the International  Snow Leopard Trust, one of the core technical and financial partners of the GSLEP program, said, “Asia’s 12 countries that are home to its high mountains and snow leopards have shown the world how we can set aside our differences and come together to work for nature and wildlife, for local people, and for a better planet”.

As part of the program, the government delegations  discussed and reviewed the conservation work being done by the various countries and the GSLEP Secretariat and identified priority actions to preserve High Asia’s ecosystems and improve the well-being of the people living there. They shared their experiences of conservation and in promoting local community leadership to protect snow leopards and usher in green economies and businesses. The participants at the meeting also discussed innovative financing for nature conservation through development activities, climate adaptation in the highlands of Asia, linear infrastructure in the mountain ecosystems, trans-boundary cooperation, as well as conservation and sustainable community-based livelihoods. “A third of the world’s snow leopard population lives within 100 km from international borders, making them the true ambassadors of the UN resolution-nature knows no borders”, said Dr Koustubh Sharma, International Coordinator of the GSLEP program.

The meeting concluded with the endorsement of a joint resolution, and the unanimous election of the Environment Minister of Bhutan as the next co-Chair of the Steering Committee. Kyrgyzstan holds the other permanent co-chair of the GSLEP Steering Committee as the host of the Secretariat. The Chair of the Environment Protection Committee of the Government of Uzbekistan offered to host the next meeting in 2023 during his address.

The Global Snow Leopard and Ecosystem Protection Program (GSLEP) was initiated in 2013 to help achieve the goals of the 2013 Bishkek Declaration, jointly endorsed by the snow leopard range countries. Owned by 12 countries and supported by international organizations and multilateral agencies, the GSLEP promotes the exchange of conservation best practices, intergovernmental cooperation, and close collaboration among multiple stakeholders. Within the framework of the program, issues of preserving and ensuring livelihoods throughout the entire territory of High Asia are being addressed.